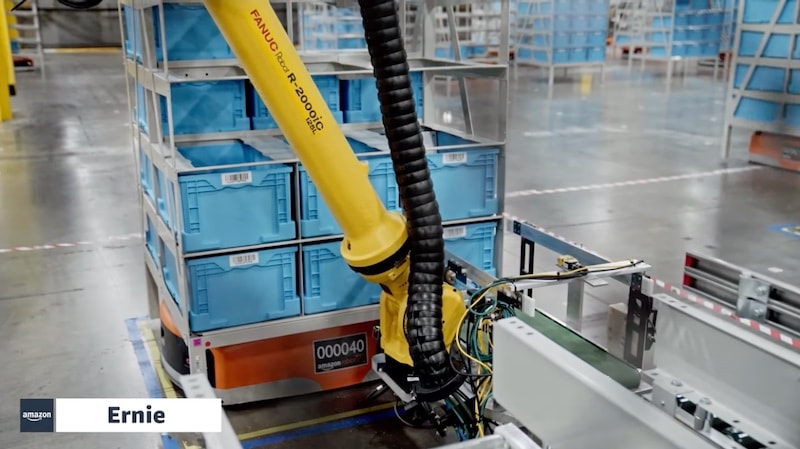 Amazon is testing robots to move carts and packages at its warehouse facilities, which it says will make employees safer and reduce accidents. Amazon has drawn a lot of criticism over unsafe working facilities for many years now. Now it is working on two robots called Bert and Ernie. Amazon said that at most of its fulfilment centres, it’s the employees who pick or load items onto mobile shelves as they move through the process of fulfilling customer orders.

To reduce the need for employees to reach up or bend down while fetching or retrieving these items, the company is testing the robot called Ernie. It involves taking totes off of a shelf and using the robotic arm to deliver items to employees to ensure they are always in a more comfortable and ergonomically friendly position.

Kevin Keck, worldwide director of Advanced Technology at Amazon, said that while the e-commerce company was known to the world for innovating for its customers, the robotics for employees gave him extra motivation. “The innovation with a robot-like Ernie is interesting because while it doesn’t make the process go any faster, we’re optimistic, based on our testing, it can make our facilities safer for employees,” he was quoted as saying by Amazon in a post.

Besides gathering quantitative data on Ernie’s performance from the lab, the team is also seeking feedback from employees, who are working with and testing the new equipment. Teresa Lykstad, an Amazon employee who works in the Seattle area research and innovation lab, said that she thought Ernie was working out well in the testing and it was safer.

And in the same lab where Teresa works, three more robotic solutions are being tested. One of them, Bert, is one of the company’s first Autonomous Mobile Robots, or AMRs. Amazon said that it had always been difficult to incorporate robotics into areas, where people and robots could work in the same physical space.

Bert, which is similar to a cart with multiple shelves, can be seen moving through the Amazon facility in the video shared by the company. It said that in the future the employees will be able to summon Bert to carry items across a facility, adding at some point the robot will be able to carry heavier items and reduce the strain on employees.

Besides “Ernie” and “Bert”, two other robots “Scooter” and “Kermit,”, too, operate autonomously, but they transport carts. Amazon said that with these robots starting to carry out physical tasks, it makes the facilities safer for employees and allows them to focus on jobs that require more critical thinking. The company said it was planning to deploy “Scooter” to at least one Amazon facility this year.

In India, robotics firm GreyOrange has been working with e-commerce companies to develop and deploy similar technology, and demonstrated this in a warehouse environment for Gadgets 360, and had explained that robots in a warehouse setup are pretty much autonomous which means they have to understand the surroundings, apart from other factors. “There are multiple kinds of sensors to sense the environment, location, speed, temperature, and their own battery system,” a GreyOrange executive told Gadgets 360 in an earlier interview. “They are completely autonomous hence needed to be fitted with all kinds of sensors.”

GreyOrange also launched two types of robots, the Sorter and the Butler. The Sorter is a high-speed sorting system that profiles and routes packages based on customisable logic, helping companies with multiple supply chains. GreyOrange claimed that the Sorter can sort up to 6,000 packets an hour for warehouses.