Battlegrounds Mobile India (BGMI) has surpassed 50 million downloads on Google Play Store, Krafton has confirmed. The popular battle royale game was released for Android on July 2 and by August 14, the game was downloaded by over 50 million Android users in India.

With this, BGMI now ranks second in the list of top-grossing games on Play Store, only bested by Garena Free Fire. Additionally, Krafton has also revealed that it will be making announcements for the iOS version of BGMI “very soon” on its social media handles.

Celebrating the 50 million download, Krafton is offering the Galaxy Messenger Set outfit to players and more rewards. “We extend our warm wishes to our Indian fans on the occasion of Independence Day. We are delighted to be a part of this celebration, made even sweeter with BATTLEGROUNDS MOBILE INDIA hitting 50M downloads on the Play Store in just over a month! I am looking forward to an equally strong response to our first esports tournament starting next month,” said Mr Wooyol Lim, Head of Battlegrounds Mobile Division, Krafton. 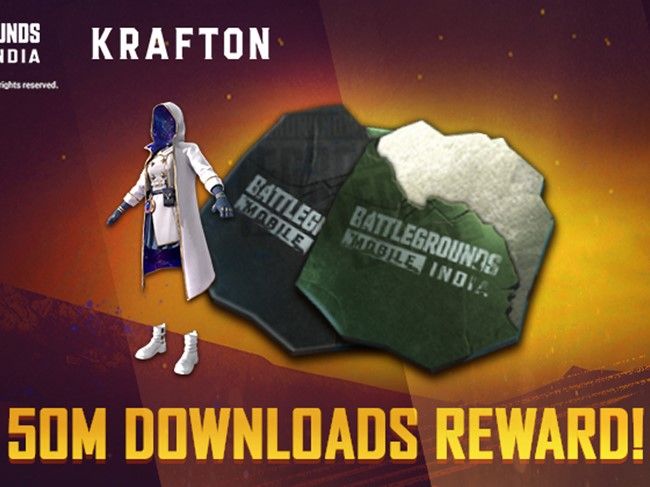 Krafton also conducted a Freedom Face-Off event on the occasion of Independence Day with Team Encore being crowned as the winners. Furthermore, Krafton is hosting an in-game Independence Day Mahotsav event where players can win rewards including a temporary AWM skin. This event will go on until August 19.

Battlegrounds Mobile India Series has also been announced and has received over 540,000 registrations to date with more players still registering for the game. The stream schedule for the tournament will be revealed after the registrations come to an end.

The Royal Pass Month 2 also commenced last week with the theme Project T with new outfits and rewards. The maximum RPM rank remains 50 but the number of rewards for each tier has been increased. Moreover, the challenge missions will now last for a month.