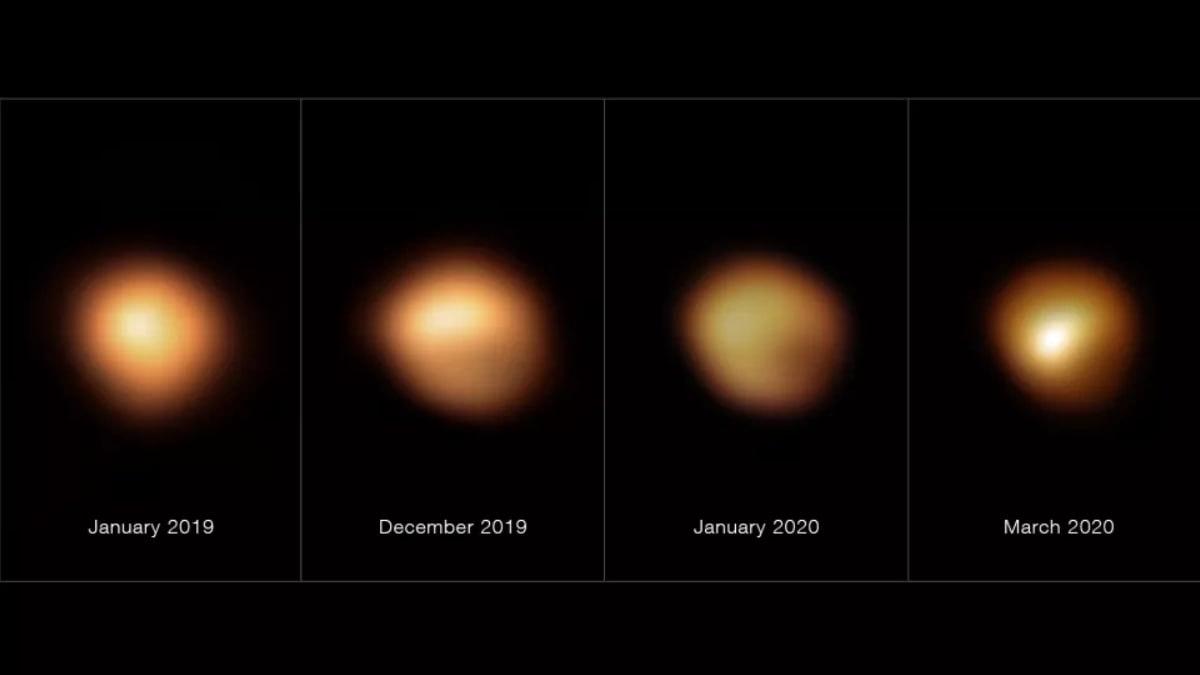 Betelgeuse, once said to be the ninth most luminous star in the sky, started dimming rapidly in December 2019. Even though Betelgeuse was always a “variable” star, meaning its brightness would fluctuate, by February 2020 it had reported a loss of nearly two-thirds of its brightness. This made astronomers wonder if it was soon going to explode as a supernova. A team of scientists has found the reason behind the rapid rate at which the star has been growing dim. They said that the dimming wasn’t an indication of an explosion of Betelgeuse, known as the gleaming right shoulder of the constellation Orion.

The team of scientists said that the most likely explanation could be a giant cloud of dust making the star seem dimmer to those on Earth.

The study titled ‘A dusty veil shading Betelgeuse during its Great Dimming’ has been published in the Nature journal. The authors said in the introduction of the paper that observations and modelling support a scenario in which “a dust clump formed recently in the vicinity of the star”. The authors have, however, added that some red supergiants, such as the one Betelgeuse is, show “little or no sign of their impending core collapse, years to weeks before it happens”.

But they explained that while the current mass-loss behaviour of the giant star, almost 15 times that of the Sun, doesn’t show any sign of its impending explosion, it could explode without warning. Following their research, the authors could figure four scenarios explaining the Great Dimming of Betelgeuse.

The first, they said could be a (potentially local) decrease in the effective temperature of the star, making it fainter. The second, according to them, was an occultation by newly formed dust. Third, an occultation by dust transiting in front of the star and forth a change in the angular diameter.

They then check each scenario against their observations and ruled out the third and fourth scenarios straightaway. “Our findings suggest that a component of mass loss from red supergiants is inhomogeneous, linked to a very contrasted and rapidly changing photosphere,” they said.

Having said that, there’s no denying that Betelgeuse will go supernova someday, if not immediately. Miguel Montargès, an astrophysicist at Catholic University-Leuven in Belgium, and the lead author of the paper, had in 2019 said: “But I’m not holding my breath for it.”

The same year it was reported that though the supergiant was nearing the end of its life span, it could still be as long as 100,000 years before the star begins its death throes.