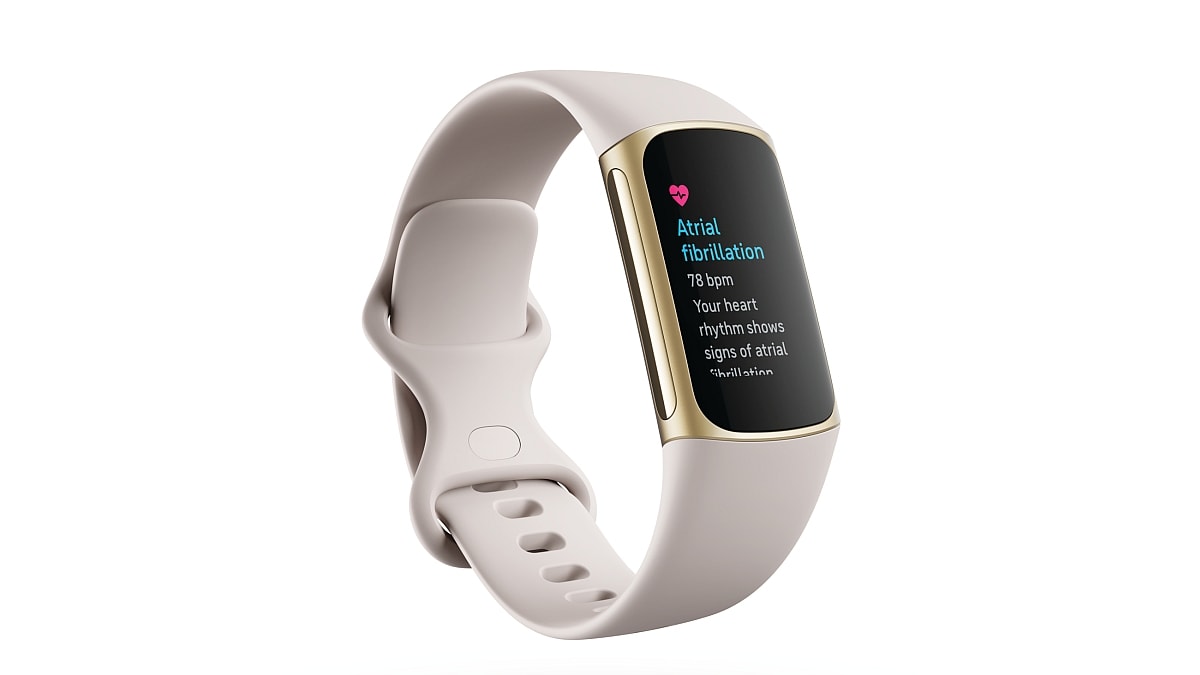 Fitbit Charge 5 has been unveiled globally with a sleeker design and a brighter display than its predecessor. Fitbit says the Charge 5 is 10 percent thinner than the Fitbit Charge 4 but continues to offer up to 7 days of battery life. The fitness band comes with a new health metric called the Daily Readiness Score that calculates your “readiness” for a workout and suggests what you should be doing on a given day based on your heart rate, sleep, and activity. It may suggest light yoga, high-intensity workouts, or even rest depending on the score. Other features of the Fitbit Charge 5 include an on-wrist ECG app and an EDA sensor for tracking stress levels.

The Fitbit Charge 5 housing is a combination of aluminium, glass and resin and it comes with a silicone band. It features stainless steel rails on the sides that double up as sensors for the ECG app as well as the EDA sensors. The wearable comes with a 1.04-inch colour AMOLED touchscreen display with 450 nits of peak brightness, an Always-On mode, and no buttons. Fitbit Charge 5 is said to be 10 percent thinner than the Charge 4 and feature a 2x brighter display.

The fitness tracker features 20 colourful watch faces, built-in GPS + GLONASS, SpO2 sensor, skin temperature sensor, and optical heart rate monitor as well as NFC. The Fitbit Charge 5 is swim-proof with water resistance up to 50 metres. It is compatible with both Apple and Android devices running iOS 12.2 or higher and Android 8.0 or higher, respectively. Fitbit claims the battery of the Charge 5 can last for up to 7 days and it takes about two hours to charge.

The Fitbit Charge 5 can relay email and call notifications and features quick replies (only for Android), a Do Not Disturb mode, a Smart Wake alarm — that goes off during your optimal stage of sleep within 30 minutes before its set time — and Fitbit Pay contactless payments (in select markets). It connects to a smartphone via Bluetooth and supports Google Fast Pair for Android users.

In terms of features, the Fitbit Charge 5 introduces a Daily Readiness Score that is only accessible to Fitbit Premium users. It essentially tells you whether you should focus on recovery or do an intense workout on a given day. The score is analysed based on level of activity, last three days of sleep, and heart rate variability. Other health features of the new Fitbit tracker include 20 goal-setting exercise modes, real-time active zone minutes tracking, automatic exercise recognition, and sleep monitoring. Fitbit says the Daily Readiness Score feature will not be available at launch and will be introduced to Charge 5, as well as Sense, Versa 3, Versa 2, Luxe, and Inspire 2 devices, via an update soon.

The ECG app, too, will not be bundled with the wearable at launch — available on Fitbit Sense — but the company says it will be introduced on the Charge 5 soon. After each assessment, the ECG app will provide a PDF report that users can share with their doctors to check for atrial fibrillation. In addition, the Charge 5 will also send on-wrist notifications when the heart rate is above or below the preferred range. It also offers data on breathing rate, heart rate variability, skin temperature, menstrual cycle, and blood oxygen saturation (SpO2).

With the bundled Fitbit Premium subscription, users get access to video workouts from brands like Daily Burn, Physique 57, Popsugar, Aaptiv, and more. It also offers access to over 300 mindfulness sessions from Deepak Chopra, Croix, Breethe, and others. Fitbit has also partnered with Calm app to offer 30 pieces of new content for Fitbit users.