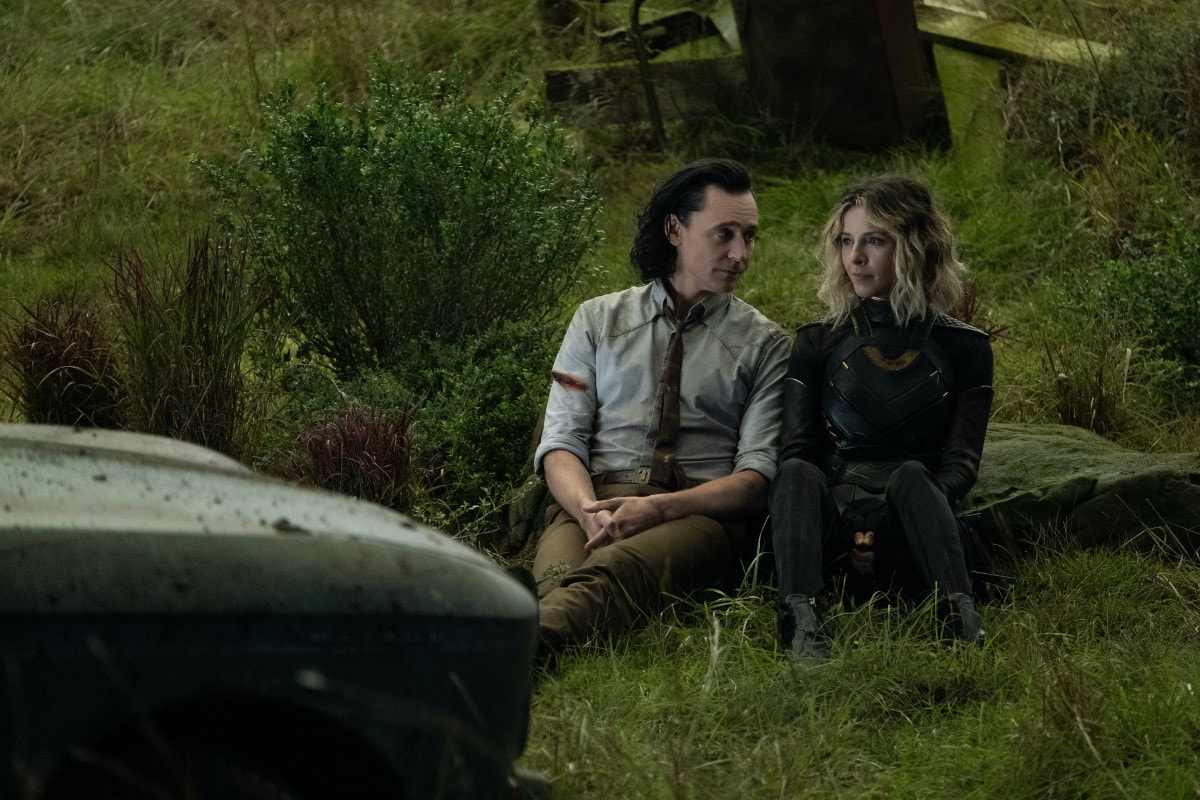 Loki — Marvel Studios’ first ongoing TV series that ended its six-episode first-season run on Wednesday — had a number of big surprises in store for its audience. Spoilers ahead. For its title character, the God of Mischief (Tom Hiddleston), the most meaningful of them all was meeting and falling in love with Sylvie (Sophia Di Martino), a variant of himself from another reality. It might be a sick, twisted romantic interest, as Loki’s new (and now former?) best friend and time detective Mobius (Owen Wilson) called it on Loki episode 4, but it’s also fitting in a way. A narcissist as big as Loki could only fall for himself. A god who couldn’t see past his own pompous self would realise there’s more to the universe only in a mirror of themself.

That latter bit was enabled by the other major new character on Loki: Kang the Conqueror (Jonathan Majors). Okay technically, He Who Remains — a variant of Kang, who put an end to all that conquering business, ended the Multiversal War with the help of purple-cloud entity Alioth, founded the Time Variance Authority, and established the sacred timeline. It’s Kang who — through a series of (never-ending) monologues in Loki episode 6 — ultimately gets through to Loki, making him realise that he must aspire to something more if he doesn’t wish to be stuck in his endless cycle of pain and destruction. By the end of the season, Loki is a changed man. He goes from hating on the TVA for determining everything, to being a willing ally for that cause.

This is both new, and an old story for Loki. Over the course of the Thor family saga — that’s 2011’s Thor, 2013’s Thor: The Dark World, and 2017’s Thor: Ragnarok — the God of Mischief came to admire and care for his God of Lightning brother. He went so far to risk his life in Avengers: Infinity War and paid the ultimate price. Yes, self-preservation was part of the equation too, but it’s easy to imagine an earlier Loki actually pledging his allegiance to Thanos (Josh Brolin). The Loki in Loki hasn’t personally been through that sure, given Marvel plucked this variant from 2012’s The Avengers, but he did learn about his mistakes and failures through a series of tapes at the TVA. As Mobius puts it succinctly then in Loki episode 1, he existed so others could achieve their best selves.

Maybe that’s what Loki takes to heart here, and why he comes to care for Sylvie — again, it does stem from self-preservation (save himself from TVA) and grandiose plans (overthrow the Time Keepers), but eventually after learning about the pain and trauma of her life, Loki begins to fight for Sylvie. “I just want you to be okay,” he says, welling up, in the Loki season 1 finale. But Loki’s love also blinds him to Sylvie’s belief, deluding him into thinking he could stop her from fulfilling her life-long mission. They might be alike, they might even be the same individual from different realities, but they are definitely not the same person. “But I’m not you,” Sylvie says as much in reply to Loki’s pleads. Loki is not just Loki’s journey, it’s also Sylvie’s. And it’s her actions that set the stage for what’s to come elsewhere.

That brings us to the larger purpose — of course there was one, this is a Marvel property after all — of Loki season 1: a multiverse. After over a decade of operating on the same timeline, the Marvel Cinematic Universe now spans alternate dimensions and parallel universes. Loki wasn’t the first to toy with the idea though. We had a fake-out in 2019’s Spider-Man: Far From Home where Jake Gyllenhaal’s villain claimed to be from a different Earth (but he was lying), and a red herring in WandaVision, where X-Men fans assumed Evan Peters was playing Quicksilver, but Marvel was just trolling us. Loki is the first to do it for real. Ahead of premiere, Loki head writer Michael Waldron said it would have “wide-reaching ramifications” across the MCU — and well, here we are.

Loki‘s effects will be first felt later this year in the Tom Holland-led threequel Spider-Man: No Way Home, releasing December 17 in cinemas. We have known for a while now that Alfred Molina’s Spider-Man 2 villain Doctor Octopus, and Jamie Foxx’s The Amazing Spider-Man 2 villain Electro, have roles in the film. Reports also claim that Holland’s Spider-Man predecessors, Tobey Maguire and Andrew Garfield, will return alongside — though everyone involved keeps saying it’s not happening. Either way, it’s three different eras of Spider-Man movies colliding, all thanks to Loki. Benedict Cumberbatch’s Doctor Strange is said to be involved as well, taking over from Tony Stark/ Iron Man as a mentor to Holland’s Peter Parker. Promotions for No Way Home tie-in toys more or less confirms this.

Following that, we have the big one. It’s literally in the title — Doctor Strange in the Multiverse of Madness, coming March 2022 to theatres. In addition to Cumberbatch (obviously), the Doctor Strange sequel has Elizabeth Olsen in a starring role, alongside Hiddleston in an unknown capacity. As I noted back in March in my WandaVision series review, that’s two different series (WandaVision and Loki) and one movie sequel (Spider-Man: No Way Home) all playing into another sequel. Almost a year later in February 2023, Majors will return as Kang the Conqueror — or some variant of him — opposite Paul Rudd and Evangeline Lilly in Ant-Man and the Wasp: Quantumania. And naturally, we can expect more multiverse mayhem to follow in the now-confirmed but undated Loki season 2.

This is all quite wild. But thankfully, Loki was not as obsessed with the future of the MCU (though it certainly owed a lot to the past, what with Loki literally watching older movies). In fact, it was quite removed from it for the most part. Thanks to its retro-futuristic Mad Men meets Blade Runner vibe that inspired the design aesthetic of the TVA and everything else, and Natalie Holt’s theremin-led background score that was wholly distinct from Marvel fare, Loki carved out an identity for itself. And it wasn’t afraid to get weird, though its swings couldn’t match WandaVision’s boldness. After all, Loki episode 5 brought an alligator Loki and a frog Thor (with Chris Hemsworth voicing him). The only thing I missed was Mobius on a jet-ski, and I’ll never forgive Marvel for that.

Speaking of Mobius, Loki was able to push through its early exposition-heavy episodes because Wilson and Hiddleston are so watchable. The season 1 finale worked in a similar way, thanks to Majors’ screen presence. The Marvel series would have fallen flat on its face if the performances weren’t so good. Their characters enjoyed an instant bond too, one that grew from a place of complete distrust into a meaningful friendship over the course of the season. Unfortunately, it’s been reset of sorts going into season 2, what with Loki ending up in a universe where Mobius doesn’t even recognise him. At the same time, Marvel committed its recurrent egregious errors with Mobius, killing him and Loki off in Loki episode 4 before reversing their deaths at the end of the episode.

How many times does Marvel plan to wring emotion out of fans by killing Hiddleston? It’s happened three times now. Death has always been sort of a joke in the MCU. Characters miraculously escape from it. They cheat it. They fake it. Or they return from it thanks to an omnipotent gauntlet. With Loki, given his arc had finished emotionally and narratively, Marvel simply plucked an earlier version of him. And with Loki, it’s getting a second stab at his journey. The MCU’s long-running and fan-favourite villain continues to hang around, and will do so for at least another couple of years (for Loki season 2). I’m not complaining. Hiddleston is a constant delight, and Loki afforded him over four hours on his own, several times more than his time in three Thor entries and The Avengers put together. I just wish they didn’t leave us on such a frustrating cliffhanger.

All six episodes of Loki are streaming on Disney+ and Disney+ Hotstar.