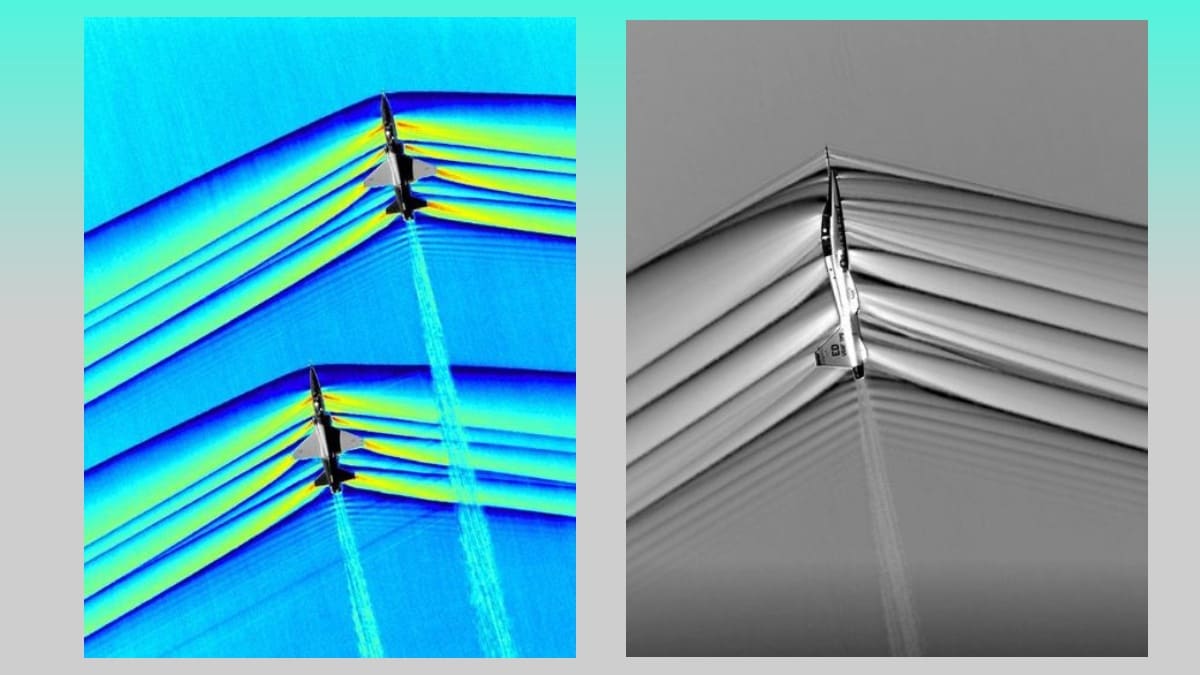 NASA has shared three stunning air-to-air images of a supersonic shock wave interaction, something never seen before. The three pictures feature two T-38 Talons, piercing through the sky. Though shared on Wednesday, the pictures are from March 2019 when the American space agency successfully tested an advanced air-to-air photographic technology in flight, capturing the first-ever images of the interaction of shockwaves. A T-38 is a two-seat, twinjet supersonic jet trainer.

In an Instagram post, NASA said, “Who knew breaking barriers could look so good?” It explained that when aircraft fly faster than the speed of sound, shockwaves travel away from them and are heard as a sonic boom on the ground. While the first two pictures have been colourised, the third is in its original monochromatic form. “These images are the product of an updated camera system aboard one of our research planes,” the agency said. “Researchers use this imagery to study shockwaves as part of our effort to make sonic booms quieter, which may open the future to possible supersonic flight over the land.”

In a separate note on its website, NASA said that the two T-38s are flying about 30 feet away from each other, adding the trailing aircraft is flying approximately 10 feet lower than the leading. This was the first time that the flow of shock waves from both aircraft as well as the interaction of the shocks was seen in flight.

“We’re seeing a level of physical detail here that I don’t think anybody has ever seen before,” Dan Banks, senior research engineer, NASA Armstrong, said in 2019. “Just looking at the data for the first time, I think things worked out better than we’d imagined. This is a very big step.”

One of the greatest challenges of the series was timing, the agency said. To acquire these images, NASA flew a B-200, equipped with an updated imaging system, at around 30,000 feet (9,144m) while the pair of T-38s were required to not just remain in formation, but also fly at supersonic speeds at the precise moment they were directly beneath the B-200. The images are a result of all three aircraft being in the exact right place at the exact right time as NASA’s operations team designated.

The researchers at NASA use these pictures to study these shockwaves which will then help it design X-59 Quiet SuperSonic Technology X-plane. While X-59 will fly supersonic, it will produce shockwaves in such a way that only a quiet thump may be heard, said the agency.