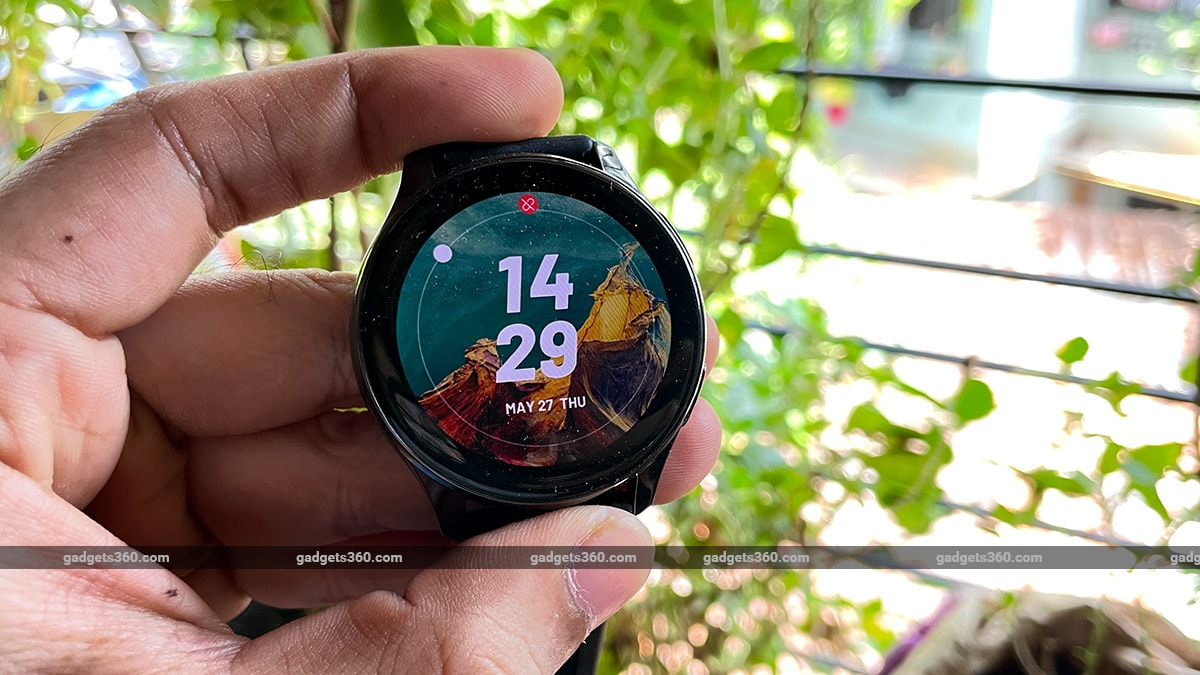 OnePlus Watch is the company’s first smartwatch, and a lot of Android users have been looking forward to it. The OnePlus Watch has a circular dial with an AMOLED display, and SpO2 tracking which is a must-have feature in these times. However, the shocker for many people when this watch launched was that it does not run Google’s WearOS as a lot of people were expecting it to. So how does the OnePlus Watch stack up against the competition? Should this be the watch you pick? I will try to answer these questions in this review.

The OnePlus Watch is priced at Rs. 14,999 in India. There will also soon be a OnePlus Watch Cobalt Limited Edition, which is expected to be priced higher but we don’t have an official price or launch date yet. While the internals of these two variants are the same, the exteriors will be different in a few ways that I’ll elaborate on later.

Most smartwatches are available with either of two dial shapes, a square or a circle. While the square (or “squircle”) shape has been popularised by the Apple Watch, there are people who prefer a circular dial since it resembles a traditional watch. OnePlus has chosen the latter, and the result is a big 46mm circular dial set in a case that is made out of stainless steel. The case looks and feels premium and is available in two colour finishes, Midnight Black and Moonlight Silver.

The OnePlus Watch has a 1.39-inch AMOLED display and thin bezels that were hard to spot on my Midnight Black unit. There is 2.5D curved glass on top of the display, which rises slightly above the rim of the case. The overall design looks clean and there are two buttons on the right side. The button on top has OnePlus engraved on it while the other is plain.

Turn the OnePlus Watch over and you’ll notice that the underside is made out of plastic. It houses several sensors as well as the charging contact points. There’s a speaker port on the left side and a microphone hole on the right. The case lugs extend outward and are compatible with all standard 22mm straps. OnePlus supplies a high-quality fluoroelastomer strap with the standard OnePlus Watch. I wore the watch for over two weeks and never experienced skin irritation. These straps have a pin and tuck design just like the Apple Watch, which I found to be convenient and reassuring. You can remove the strap without any tools and replace it with any other 22mm strap of your choice.

The OnePlus Watch alone, even without an attached strap, weighs about 45gms and that weight is definitely noticeable when worn. OnePlus only offers a single 46mm dial size, which might look big on your wrist if you have small hands. The watch is also relatively thick, and there’s a chance you might brush it against something when walking or just moving your hands. I did knock the watch into a few door frames accidentally while using it, but thankfully, it didn’t pick a single scratch during the review period.

If you want better build quality, that is where the OnePlus Watch Cobalt Limited Edition comes in. The case of this variant is made out of a Cobalt alloy instead of stainless steel, and it has a gold finish. It also has sapphire glass protecting the display, which is said to offer better scratch resistance. OnePlus ships two straps with the Cobalt Limited Edition, a fluoroelastomer strap just like the standard one that comes with the OnePlus Watch, and an additional vegan leather strap with a butterfly buckle.

The OnePlus Watch uses a charger with pogo pins to top up its 402mAh battery. In true OnePlus fashion, there is fast charging on this watch. The OnePlus Watch is also IP68 rated for dust and water resistance, and the company says it can also handle up to 5ATM of pressure.

When leaks about the OnePlus Watch first surfaced, I was speculating that it would run Google’s WearOS and sport the Snapdragon Wear 4100 processor. If you were also expecting something similar, well that’s not the case. The OnePlus Watch runs a custom Real-Time Operating System (RTOS) and not WearOS. Interestingly, it has three discrete processors, each assigned a different function. As per a forum post by a OnePlus Product manager, the OnePlus Watch uses a combination of ST32, Apollo 3, and Cypress chips. These are in charge of driving the display, low-power usage, and communications respectively.

The OnePlus Watch has an accelerometer, ambient light sensor, gyroscope, geomagnetic sensor, barometer, blood oxygen sensor, and heart rate sensor. There is support for Bluetooth 5, NFC, and four satellite navigation systems. You get 4GB of storage so you can store a few audio tracks on the OnePlus Watch for offline listening. Pairing the watch with a pair of Bluetooth headphones is possible so you can leave your smartphone behind when heading out for a run. 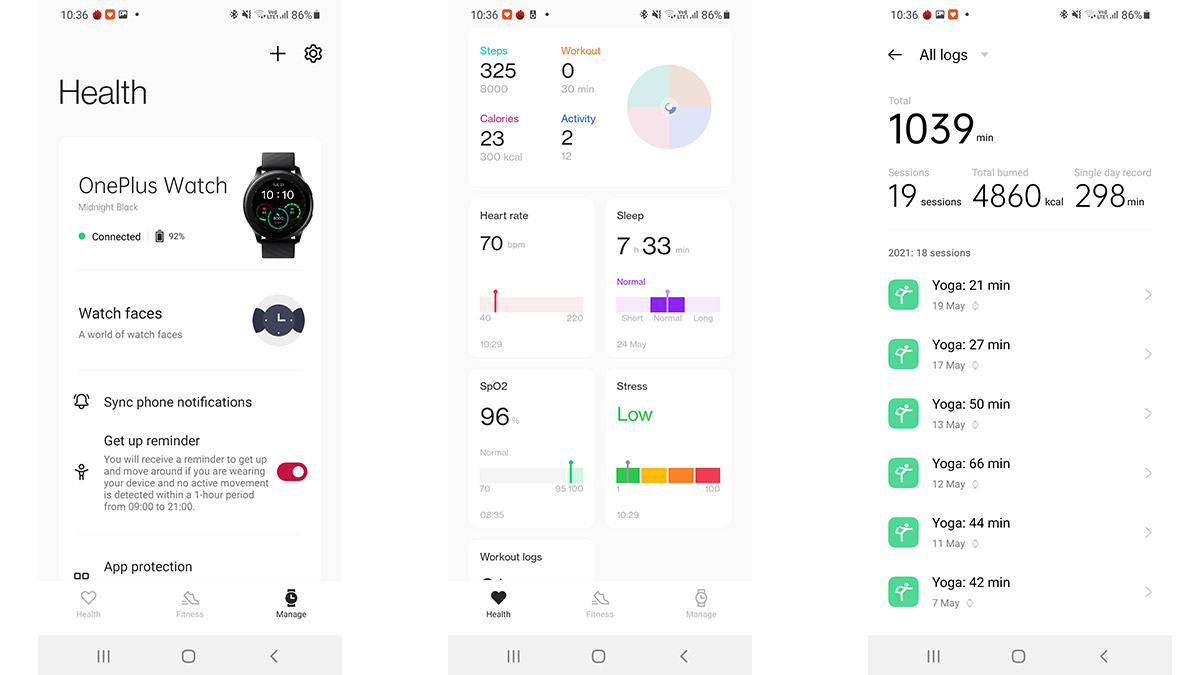 The OnePlus Health app is the dashboard for all your fitness data and you can also make changes to certain device settings right from the app. It even lets you change watch faces and download new ones. You can have a digital or analog watch face, but weirdly, I couldn’t set a digital watch face in the 12-hour format; only the 24-hour time format was available. You also have the option to create your own custom watch face using your photos. This app is required to transfer songs from your smartphone to the OnePlus Watch.

The OnePlus Watch has a very simple UI which makes navigating easy. Swiping up from the watch face gives access to pending notifications, and a swipe down lets you access quick toggles. You can also tap and hold on the watch face to change it. I could read notifications on the watch easily but could only reply using predefined quick reply templates, which isn’t ideal.

The OnePlus Watch did not have an always-on display capability at first, but this was rolled out as a part of a software update shortly after its launch. You can enable this from the watch itself and select from four faces. The OnePlus Watch also has an ambient light sensor that can adjust screen brightness automatically.

I found the OnePlus Watch to be aggressive with power saving. The screen would go off quickly after I was done glancing at it. The auto-brightness adjustment was also aggressive, and the default brightness is a bit low. You do have the option to increase it, which I did. 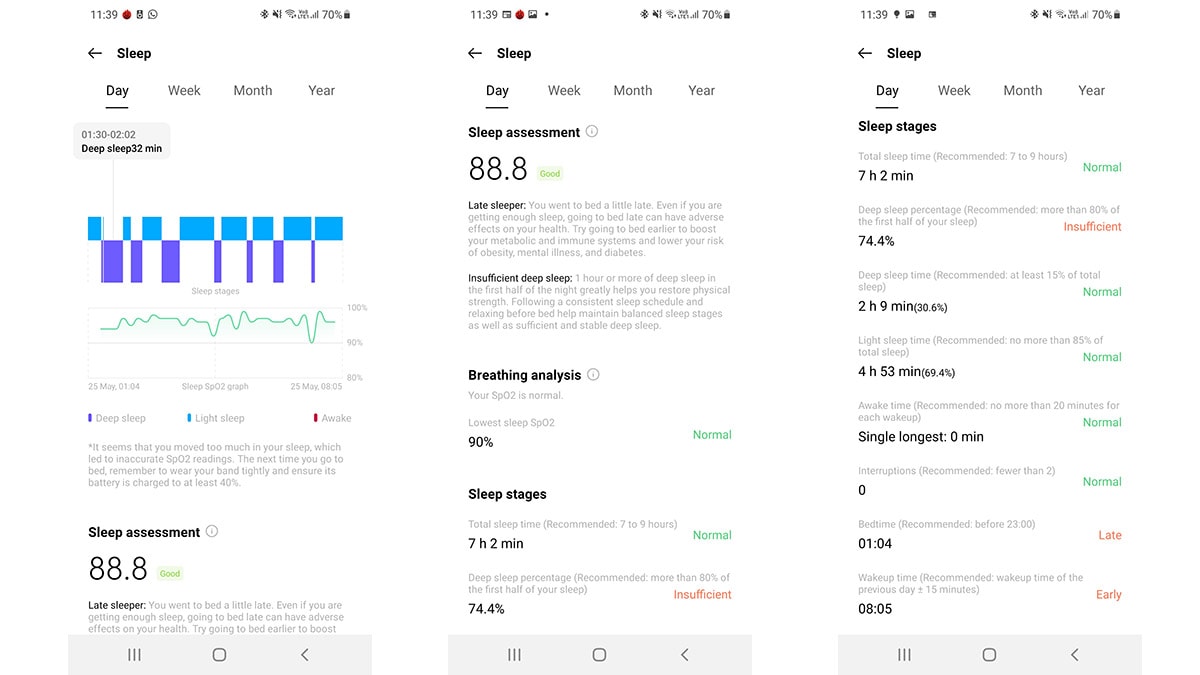 The OnePlus Watch can track workouts, heart rate, stress, SpO2, and sleep. I tested the watch for close to a month to see how it performs. To check the accuracy of the heart-rate sensor I compared its readings against those of an Apple Watch SE. I found the heart rate readings to be almost the same on both devices most of the time. However, heart rate tracking accuracy was inconsistent while working out.

For SpO2 tracking, I tested the OnePlus Watch against a Samsung Galaxy S10 Plus and got the same readings. I usually got SpO2 readings between 96 percent and -98 percent, which is within the right range for a healthy individual.

Sleep tracking was accurate on the OnePlus Watch and matched with what the Apple Watch SE was able to record. In the OnePlus Health app, you get a breakdown for Deep sleep, Light Sleep, and Awake durations. It also shows information about the ideal duration of each sleeping phase. Another feature that the OnePlus Watch has is SpO2 tracking during sleep. This feature is disabled by default since it’s heavy on the battery. If enabled, the app shows the lowest SpO2 level recorded during sleep, which was 90 percent (Normal) in my case. 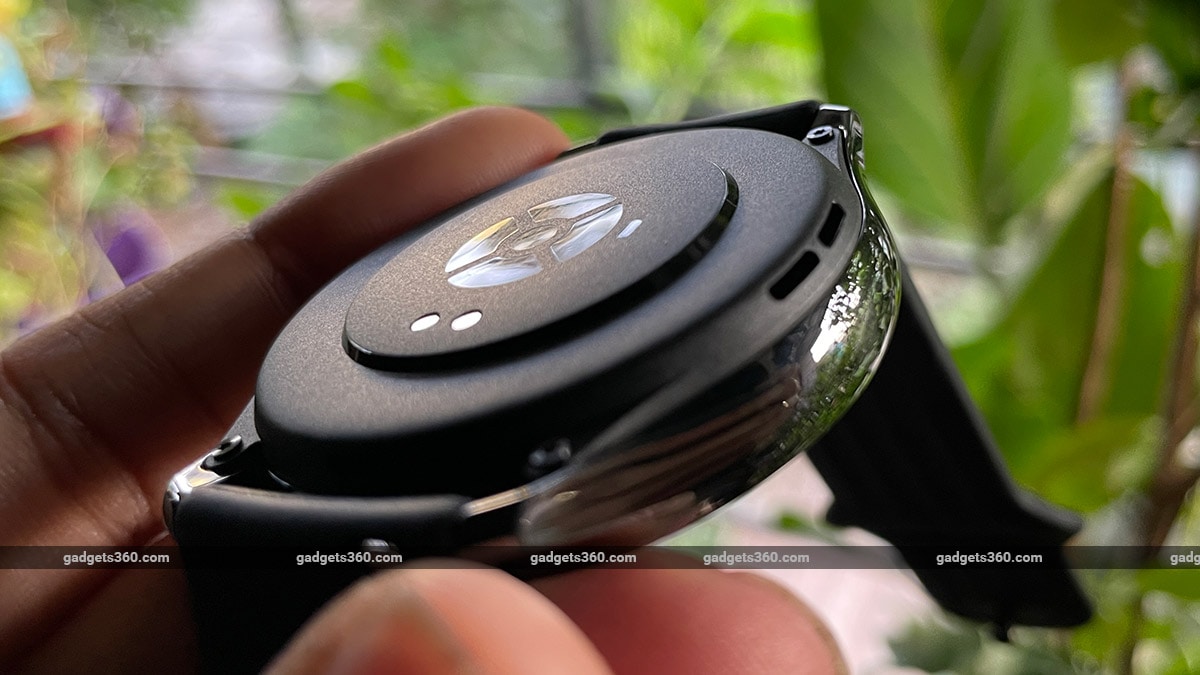 Finally, you can take calls on the OnePlus Watch using its speaker and microphone. The speaker volume is adequate if you raise the watch to your ear. My callers did mention that I sounded a little distant.

The OnePlus Watch was a highly anticipated product, but it has turned out to be anticlimactic. It does not run WearOS so you don’t get Google’s ecosystem and a large collection of apps. Functionality is limited, and this device works more like a smart notifier than a smartwatch. Good battery life, accurate sleep tracking, and SpO2 tracking are a few things going in favour of the OnePlus Watch. However step tracking and heart rate tracking during workouts were inconsistent.