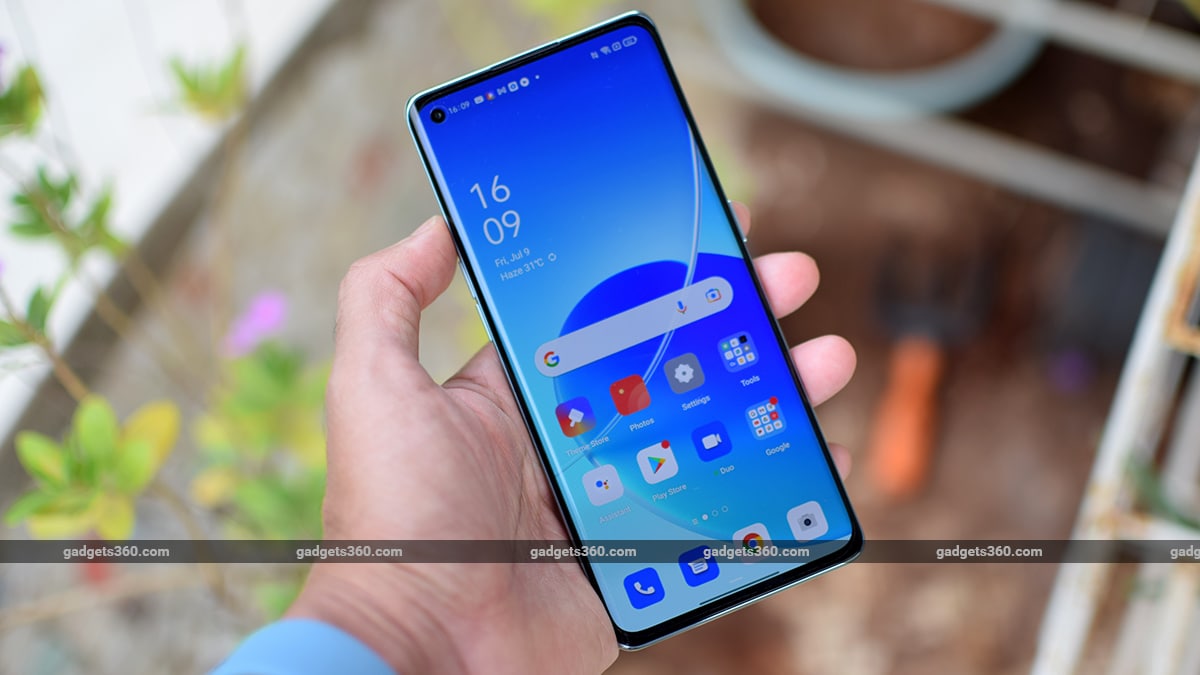 Oppo’s premium Reno line of smartphones has been updated with the newly launched Oppo Reno 6 Pro and the Oppo Reno 6, both 5G smartphones that succeed the previous Reno 5 series. Once again, the focus for these phones continues to be slimness and lightness, but they also have more powerful SoCs and new camera features to boast of. Oppo hasn’t deviated too far from the tried and tested formula that we’ve seen in the past, which is both a good and not-so-good thing. We’ll get more into this further in the review.

Today, we’ll be focusing on the Oppo Reno 6 Pro which is the hero model of the series. Oppo is heavily promoting its new “bokeh video” feature which is said to simulate the kind of soft background blur you can get when using a narrow aperture lens on a DSLR or mirrorless camera. Along with this, the Reno 6 Pro retains a lot of the features that made the Reno 5 Pro 5G great. However, we now have some very stiff competition in the sub-Rs. 40,000 segment, so can the Reno 6 Pro keep up?

The Oppo Reno 6 Pro is only available in one configuration just like its predecessor, but Oppo has doubled the storage and increased the RAM. This new model comes with 12GB of RAM and 256GB of storage. The latter is not expandable, as the SIM tray can only accommodate two Nano-SIM cards. The Reno 6 Pro is priced at Rs.39,990 in India.

Oppo has not messed about with the design of the Reno 6 Pro too much, and it looks strikingly similar to the Reno 5 Pro 5G. It’s the same thickness as the older model at 7.6mm, although the weight has gone up a bit (177g). The chrome-lined frame and the curved front and back look very nice. There’s Corning Gorilla Glass 5 over the display, while the glass at the back gets a special treatment, giving it a matte finish with a shimmering crystal-like appearance. The Aurora colour that I have looks very pretty, and this phone is also available in a Stellar Black trim.

The Oppo Reno 6 Pro is a good-looking smartphone, especially from the back

I found the placement of the buttons to be ergonomic. At the bottom, you’ll find the SIM tray, USB Type-C port, and speaker. There’s no writing on the flattened top like on the previous model, only a microphone. The Oppo Reno 6 Pro does not have a headphone jack but you do get a USB Type-C headset in the box.

The display is well-spec’d too. It’s a 6.5-inch full-HD+ AMOLED panel with a 90Hz refresh rate, HDR10+ playback certification, and a 180Hz touch sampling rate. This is exactly the same as with the Reno 5 Pro 5G, and I was hoping for more of an upgrade. The bezels are evenly slim all around and the cutout for the selfie camera is unobtrusive.

Like with the previous model, you get an in-display fingerprint sensor and the option of an always-on display to quickly check notifications, the time, the battery level, etc.

Having tested the Oppo Reno 5 Pro 5G myself, the design of the new model felt very familiar. The low weight and slim design are still positives, and the new textured finish for the glass back makes it look very appealing.

One of the biggest upgrades to the Oppo Reno 6 Pro is the new MediaTek Dimensity 1200 SoC. Compared to the Dimensity 1000+ SoC in the previous model, the new one is built using a smaller 6nm process (versus 7nm), and has a tweaked CPU configuration with more powerful ARM Cortex-A78 cores. GPU performance is also said to be improved, even though it’s the same subsystem on paper. The Reno 6 Pro isn’t the first phone in India to sport this SoC; we recently saw it in the Realme X7 Max (Review).

Despite its slim profile, the Oppo Reno 6 Pro packs in high-end specs and a big battery

Other features include dual-band Wi-Fi ac, Bluetooth, NFC, and the usual suite of sensors and satellite navigation systems. Oppo says it has used a colour temperature sensor along with an ambient light sensor, both on the front and back of the phone, for more accurate auto-brightness adjustment. FM radio is not present. The Oppo Reno 6 Pro uses a slightly larger 4,500mAh battery than the one in the Reno 5 Pro 5G, and features the same 65W fast charging capability.

The Oppo Reno 6 Pro is still sorely missing stereo speakers. The previous model skipped this too, and it’s a shame that we still don’t get them even with the new generation. Today, you can find stereo speakers in phones that cost well under Rs. 20,000, so to not have them in a phone at this price level is a big miss in my opinion.

This phone runs the company’s latest version of ColorOS 11.3, which is very similar in form and function to the version we tested on the Reno 5 Pro 5G (v11.1). There are the usual customisation options for changing the system theme, always-on display, animations, etc. You get some preinstalled apps from Oppo such as O Relax which plays soothing sounds, and there’s a gaming mode that blocks unwanted distractions when playing games.

ColorOS 11.3 in the Oppo Reno 6 Pro borrows a few features from OnePlus’ OxygenOS

There are a few interesting changes in the latest version of ColorOS. Some features and apps seem to have been directly influenced by OnePlus’ OxygenOS. For instance, there’s an ‘AOD Portrait Silhouette’ feature in the customisation menu of the always-on display, which is basically a renamed version of the ‘Canvas AOD’ feature first seen on recent OnePlus smartphones.

Even the gaming app, previously called Game Space in ColorOS, is now renamed to Games, and the interface design is identical to the app found on OnePlus phones. With the recent merger of the two companies and an announcement that ColorOS will merge with OxygenOS, we could be seeing a lot more shared features and design elements in phones from the two brands going forward.

The Oppo Reno 6 Pro still ships with a lot of unnecessary preloaded apps, which tend to spam your notification tray unless you uninstall them. Unfortunately, apps such as Theme Store and Browser are notorious for this, and these can’t be uninstalled.

Living with the Oppo Reno 6 Pro during the review period was great. It was barely noticeable in my pocket thanks to its low weight, and this also makes for more comfortable one-handed usage. The fingerprint sensor is quick at authentication, but what’s even quicker is face recognition. The latter works well even in low light.

ColorOS ran smoothly on this phone, partly thanks to the ample RAM, but also due to the speedy SoC, which didn’t skip a beat. Benchmark numbers were solid, with the Reno 6 Pro churning out an impressive 5,90,473 points in AnTuTu.

Games ran very well too. Despite the slim body, the back of the phone never got overly hot even after extended gaming sessions. Heavy titles ran such as Asphalt 9: Legends ran perfectly fine with consistent framerates. In most games that I tried, the display refresh rate dropped to 60Hz, but some, such as Brawl Stars, ran at 90Hz. The display also got very bright, which made games feel very immersive. Videos looked great too, including HDR content, although stereo sound would have made the viewing experience even better.

I found the battery life of the Reno 6 Pro to be pretty solid too. I was easily able to get about a day and half of use, which involved lots of video watching and checking social apps. The phone did well in our HD video loop test, lasting for a solid 17 hours and 21 minutes. The battery also charged very quickly with the supplied adapter. I was able to charge the Oppo Reno 6 Pro up to 96 percent in half an hour.

The camera setup on the Oppo Reno 6 Pro is pretty much identical to that of the Reno 5 Pro. There’s a 64-megapixel primary camera with an f/1.7 aperture, an 8-megapixel ultra-wide camera, a 2-megapixel macro camera, and a 2-megapixel monochrome camera. For selfies, you get a 32-megapixel front camera. The main rear camera still does not have any kind of optical stabilisation, and neither do we have a telephoto camera as an upgrade.

The cameras on the Oppo Reno 6 Pro are good for stills, but recorded videos could be better

The main selling point of the cameras this time is the Bokeh Flare Portrait filter, which you can activate when shooting videos. It does a good job of isolating the subject (it works best on people) from the background even if you move around slightly. Even the smallest light source in the background is heavily defocused, which creates shimmering patches of light. This works even during the day, for example if you have scattered sunlight coming through trees in the background. You can use this with the rear and front cameras. It’s a fun little filter that works well.

There’s also a regular “bokeh” filter for videos, and the level of background blur can be adjusted. Other camera features that we’ve seen on previous Reno models are also present, such as the AI Highlight Video and AI Colour Portrait filter.

Performance for still photos is very similar to what I experienced with the Reno 5 Pro 5G, which is to say, it’s pretty good. Both landscapes and close-up shots taken during the day pack in plenty of details. The ultra-wide camera produced slightly weaker colours, and details around the edges of the frame were below average.

Stills taken in low light looked very good too. Even without night mode, close-ups packed in very good colour and details, provided my hands were steady enough. It’s in situations like this that having optical sibilation would have made shooting a bit easier. Night mode is quite effective in brightening a scene, both with the main and ultra-wide cameras. The selfie camera also captured good-looking shots during the day and at night.

Recorded videos still need some improvement. The Oppo Reno 6 Pro can record video at up to 4K 30fps, but just like the previous model, there’s no stabilisation at this resolution, which is a letdown. Video quality is decent when shooting during the day, and even in low light when shooting at 4K. Electronic stabilisation kicks in at 1080p, but the video quality is not as good as that shot at 4K. There’s also noticeable jitter in the video when shooting in low light.

The Oppo Reno 6 Pro follows very closely in the footsteps of its predecessor – a little too close for my liking. Since the time we reviewed the Oppo Reno 5 Pro 5G in early January, the mid-range smartphone segment in India has seen some major trend shifts, and some of the feature omissions in the Reno 5 Pro are now even more glaring in the new model, especially since the Reno 6 Pro costs Rs. 39,990.

Things like stereo speakers, stabilised 4K video recording, and perhaps even an IP rating would have really strengthened the Reno 6 Pro’s position. Phones such as the Mi 11X and Realme X7 Max offer similar or even better features than the Reno 6 Pro, at much lower prices. At Rs. 39,990, you’ll find more feature-rich and powerful smartphones such as the Mi 11X Pro and the OnePlus 9R. Plus, with the upcoming OnePlus Nord 2 and Poco F3 GT expected to use the same Dimensity SoC as the Reno 6 Pro but possibly launch at more aggressive prices, it just makes good sense to wait a bit before making any decisions.

The Oppo Reno 6 Pro is one of the slimmest and lightest phones in its class, and has the looks to go with that. It’s not perfect, and there are features that are still annoyingly missing, but they don’t take away from the fact that it’s a powerful smartphone with good battery life and decent cameras for still photography. If only Oppo had priced it better to make it more competitive.