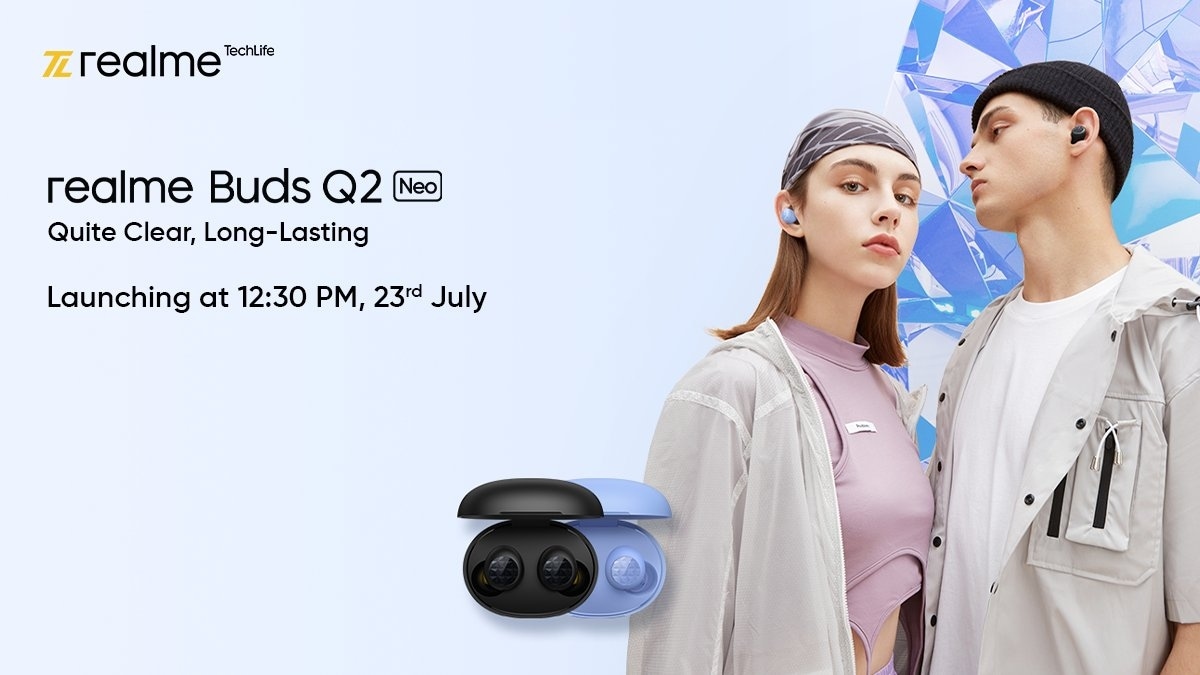 Realme announced the upcoming launch of the Buds Q2 Neo TWS earbuds through a tweet by Realme TechLife. It mentions the TWS earbuds will launch at 12:30 pm on July 23 via official Realme channels. The tweet links back to a microsite dedicated to the Realme Buds Q2 Neo that reveals some specifications of the upcoming earbuds. The pair will be available in Black and Blue colour options with a kaleidoscopic pattern on the earpieces.

The Realme Buds Q2 Neo, along with the Realme Watch 2 Pro, were earlier teased through a microsite on Amazon.

The TWS earbuds, according to the Realme microsite, will have a total of 20 hours of playback including the battery of its charging case. Each charge will give the earbuds 5 hours of playback time. Realme also claims that 10 minutes of charge can give the earbuds a playback time of 120 minutes. The earbuds will feature an in-ear design and have 10mm dynamic drivers that feature PEEK and TPU polymer diaphragm with Bass Boost+ enhancement technology. The TWS earbuds will also feature a Game Mode with low latency of 88ms for a better experience — enabling seamless sync between audio and video while gaming.

The microsite reveals that the TWS earbuds will also include touch controls on the earbuds for music playback, answering or ending calls, and to enter or exit the Game Mode. The Realme Buds Q2 Neo could come with Environmental Noise Cancellation (ENC) that blocks ambient noises during calls and Bluetooth v5 for quickly connecting to smartphones. The upcoming TWS earbuds are expected to rebranded Realme Buds Q2 launched in Pakistan in April.