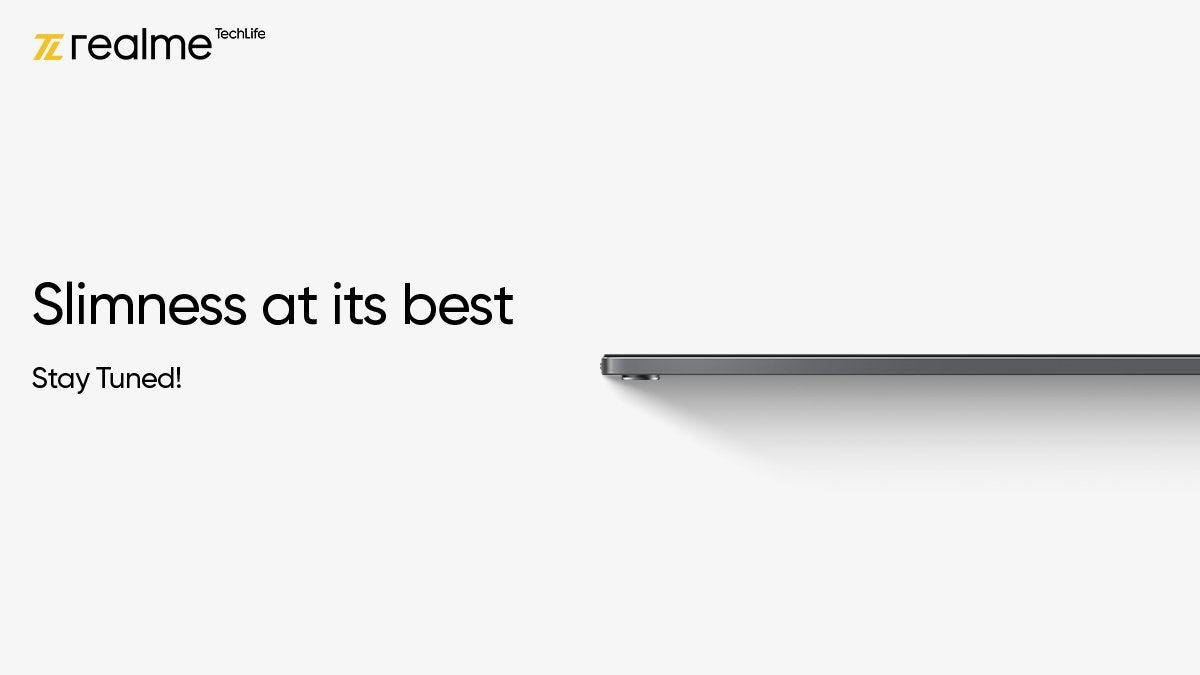 Realme Pad is teased to launch in India soon. The tablet has been leaked several times in the past. Now, the company’s India and Europe CEO Madhav Sheth has confirmed its impending arrival. He shared a teaser poster of Realme Pad, showing a portion of its side profile. The tablet is teased to feature a lightweight design and it is expected to come in a dual-tone finish. Realme Pad is tipped to sport 8-megapixel front and back cameras. Both cameras are expected to capture images in 3,264×2,448 pixels resolution.

Sheth took to Twitter to tease the arrival of the company’s first tablet — Realme Pad — in India. The tablet is teased to sport a slim profile, edged metal frame, and have a slight camera bump. Sheth suggests that the tablet will be easy to carry around. Sheth also said that Realme Pad will be ‘disruptive’ in its segment. The tweet reads, “Tablets can easily be carried anywhere for work or entertainment. However, holding them for too long can be a challenge. There is a need for a real-ly light & slim ones for your ease and we might just have a solution! Stay tuned for something disruptive is coming.”

Realme has already confirmed that Realme 8s 5G and Realme 8i will launch on September 9, as per a media invite from the company. It is likely that Realme Pad may launch alongside the two upcoming phones. The launch event is set to begin at 12.30pm IST. Realmetimes reports that Realme Pocket Speaker and Realme Cobble Speaker may also be launched at the event.

Past leaks suggest that Realme Pad may be offered in Gold and Grey colour options with an aluminium unibody construction. The front of the tablet may have moderately thick bezels with the selfie camera likely at the top edge (when held horizontally). It is tipped to sport a 10.4-inch display, a USB Type-C port, and is expected to have a housing for a stylus. Realme Pad is expected to sport an 8-megapixel sensor each for both front and rear camera modules. Both will get a 1.36-inch sensor with an f/2.8 aperture, 2.8mm focal length, image stabilisation, and a 65.3 degrees field-of-view (FoV). Both cameras are expected to capture images in 3,264×2,448 pixels resolution.

The pricing of Realme Pad is not known, but the company is likely to offer it with an aggressive price tag.