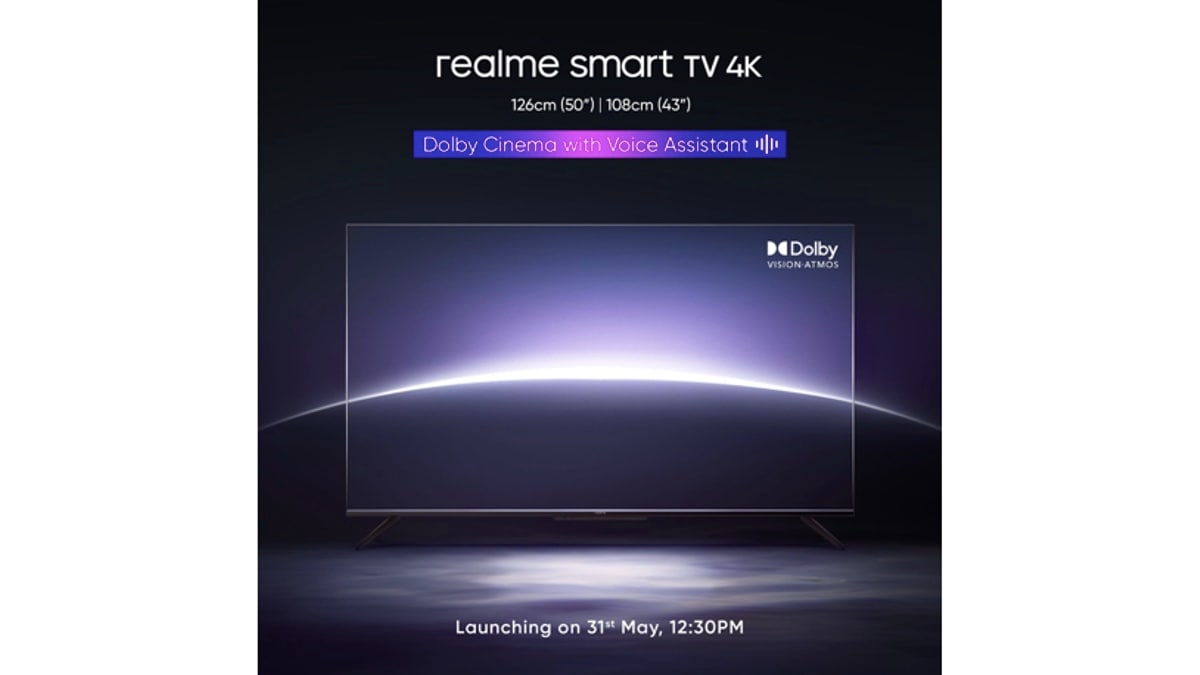 Realme Smart TV 4K range will be launching in India on May 31 alongside the Realme X7 Max 5G smartphone. The new smart TV range is the third major television launch from Realme following the Realme Smart TV and Realme Smart SLED TVs series. And, as the name suggests, the new TV models will feature Ultra-HD HDR screens. Although not much is known about the upcoming televisions right now, Realme has teased some basic features and specifications including Dolby Vision and Dolby Atmos support, as well as the size options for the new TVs.

The company has provided a basic teaser that confirms the launch date of the new television range as May 31. Some other details have also been revealed through the teaser, including the size options for the TV range and some features it will support. The Realme Smart TV 4K range will be available in two sizes — 50 inches and 43 inches — with both options having Ultra-HD resolution with HDR support up to the Dolby Vision format. There will also be Dolby Atmos audio, along with support for Dolby Cinema and a voice assistant.

No other details are mentioned in the teaser, like the smart TV platform or the type of screen technology in use, but it can be assumed that these will be LED televisions running Android TV software. Realme has gone with Android TV for its previous two launches and there’s no reason to believe that the company will change things around this time. The design of the TV in the teaser shows slim borders around the screen and a two-point stand for table-mounting as well.

The Realme Smart TV 4K range is set to launch alongside the Realme X7 Max 5G smartphone on May 31. The upcoming smartphone is tipped to be powered by a MediaTek Dimensity 1200 SoC, with up to 12GB of RAM and 256GB of internal storage. As the name suggests, the smartphone will also support 5G connectivity, which will be useful to have when mobile network operators roll out the next-generation mobile connectivity standards in India.

Ali Pardiwala writes about audio and video devices for Gadgets 360 out of Mumbai, and has covered the industry for a decade now. Ali is a Senior Reviewer for Gadgets 360, where he has regularly written about televisions, home entertainment, and mobile gaming as well. He is a firm believer in 4K and HDR on televisions, and believes that true wireless earphones are the future of the personal audio industry. Ali is available on Twitter as @AliusPardius and on email at [email protected], so do send in
…More