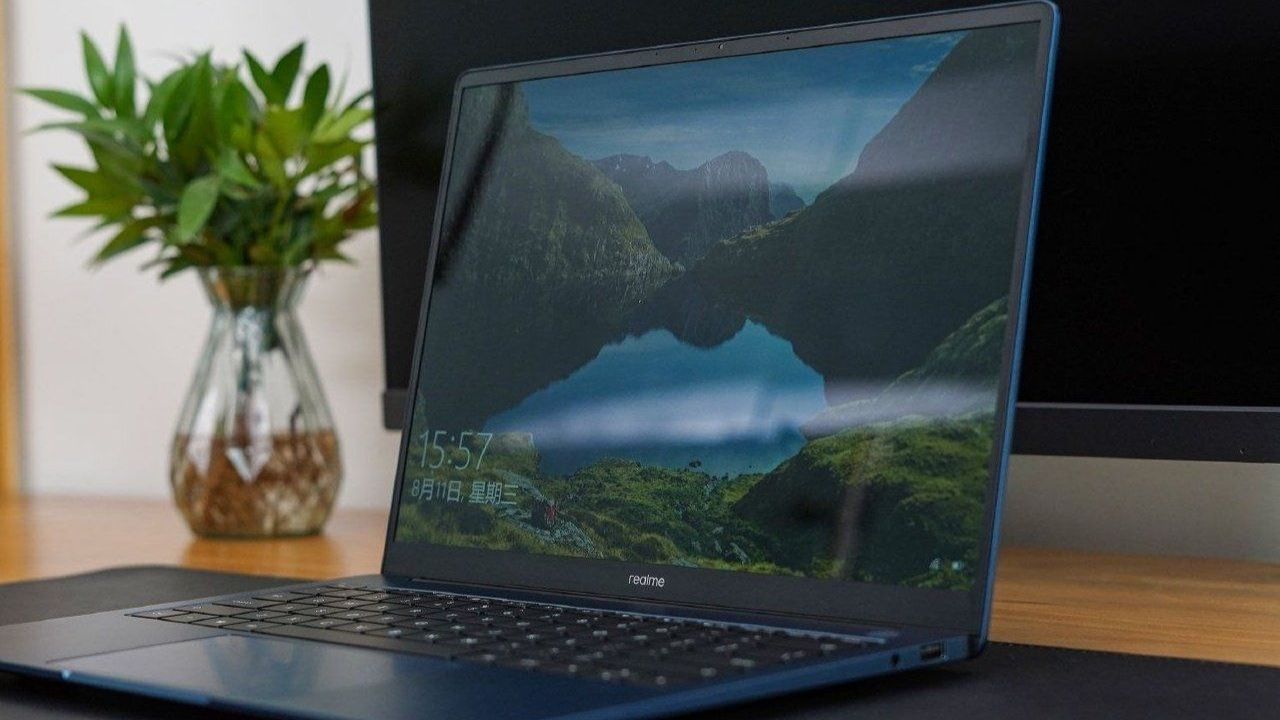 The Realme Book (Slim) is a thin and light notebook with a metal body that looks super-premium. It measures 15.5mm at its thickest point and weighs 1.38 kgs, making it both thinner and lighter than the Apple MacBook Air. The Realme Book (Slim) features a 14-inch IPS display with a 3:2 aspect ratio. Realme says the decision to go with a 3:2 aspect ratio panel was to make it a unique offering in the market with the added benefit of having more vertical screen real estate.

The 14-inch display has a resolution of 2160 x 1440 and the company says it covers 100% of the sRGB colour space. The display also seems to have minimal bezels on the sides, at least on the renders, and there’s also a 720p HD webcam on the top of the display. We’re looking at a screen-to-body ratio of 90%, which is among the highest.

The fully decked-out variant of the Realme Book (Slim) is powered by an Intel Core i5-1135G7 processor, a quad-core unit with 8 threads configured at 28W TDP. It has a maximum frequency of 4.2Ghz. This variant comes with Intel Iris Graphics, so there’s no discrete GPU option here. You get 8GB LPDDR4x RAM and 512GB SSD as standard. The base variant of the laptop is powered by an Intel Core i3-1115G4 processor, which is of course, not as powerful as the Core i5 variant. It also comes with Intel UDH graphics instead of the more powerful Intel Iris Xe graphics seen on the i5 variant.

Internal specs aside, the Realme Book (Slim) comes with a backlit keyboard with 3 stage lighting and even a fingerprint scanner with support for Windows Hello. In terms of the ports, you get a very limited option in the form of a Thunderbolt 4 port, a USB Type-C 3.2 Gen 2, and a USB 3.1 Type-A port along with a 3.5mm headphone jack. So you will have to use dongles for HDMI or Ethernet use. Realme says they will be selling those adapters separately on their website.

Realme didn’t mention the battery rating but the company says that the laptop comes with a 65W charger to get the laptop’s battery up to speed in no time. The company says the laptop can last up to 11 hours on a single charge, and it also supports 30W Dart charging. Realme also talked about how the Realme phone can connect with your laptop seamlessly with the help of an app called PC Connect. The laptop also comes pre-installed with Windows 10, with a planned free upgrade to Windows 11 when it becomes available. We’ll be taking a detailed look at the laptop once we get our hands on it but for now, let’s check out the pricing.

Realme has launched the Realme Book (Slim) in India for a starting price of Rs 46,999. At that price, you will get a Realme Book (Slim) with an Intel Core i3 processor, 8GB RAM, and 256GB storage. A fully decked-out Realme Book (Slim) with an Intel Core i5-1135G7,8GB RAM will cost you Rs 59,999. The laptop goes on sale on August 30 from Flipkart and Realme’s official website. Both laptops are available in two colour variants i.e. Real Grey and Real Blue. If you are planning to buy one, then be sure to grab them at the introductory price of Rs 44,999 and Rs 56,999.