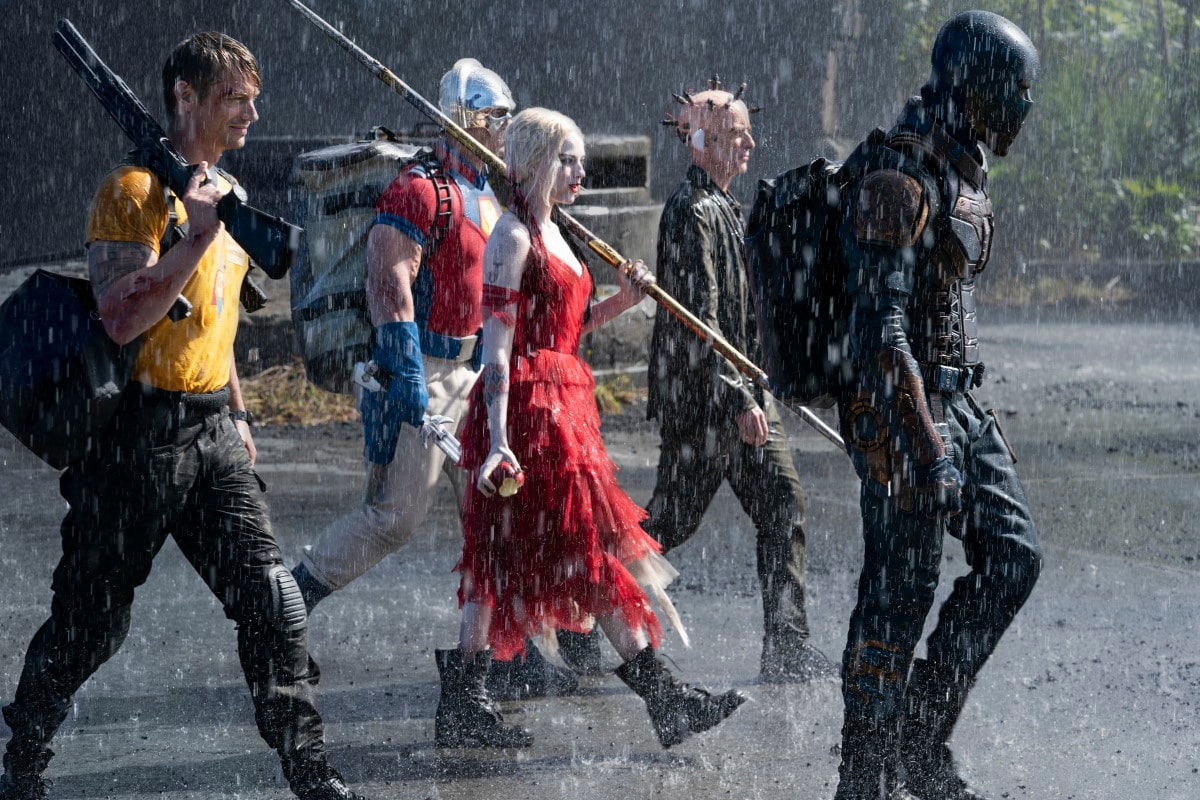 The Suicide Squad — out now in cinemas and on HBO Max — is a soft reboot of Suicide Squad, and it really pushes the boundaries of weird, in a good way. Funnily enough, the new DC movie exists because of Disney, and a Twitter campaign against writer-director James Gunn. A little over three years ago, Disney fired Gunn after a series of offensive tweets resurfaced from a decade ago. Despite initially insisting that Gunn would not be rehired on Guardians of the Galaxy Vol. 3, the owner of Marvel Studios would go on to do just that. It was an unexpected reversal, but for Gunn, it proved even sweeter. During the interim, Warner Bros. had swooped in and offered him the pick of his choice. Gunn decided on a Suicide Squad movie — and lo and behold, it’s here, its existence a consequence of his firing.

On paper, it makes a lot of sense that Gunn would opt for The Suicide Squad. A ragtag group of anti-heroes and supervillains who band together to create mayhem? That’s essentially his forte. For Marvel, Gunn has written and directed Guardians of the Galaxy and Guardians of the Galaxy Vol. 2, which have both won praise from most critics and made a combined $1.64 billion (about Rs. 12,153 crores) at the worldwide box office. When The Suicide Squad was first announced, my first reaction was: “Oh, he’s going to do his Guardians shtick at DC now.” Surprisingly, The Suicide Squad is more than just DC’s Guardians of the Galaxy. Of course, it does have Gunn’s favoured elements — cutting dramatic tension with jokes and peppering the film with nostalgic tracks — as it’s his film after all.

But it’s also Gunn operating with his raw sensibilities and shredding what hasn’t worked for him before. As such, The Suicide Squad is not bothered with storytelling constraints. In fact, the film’s plot can probably be summed up in two sentences. There’s little narrative momentum hence, as the new DC movie feels like a series of sketches stitched together. The Suicide Squad is essentially a giant big joke that the film is in on. Half its characters are jokes, dead two minutes after they are introduced. Gunn promised he would kill many, and well, he does. That said, the rest have plot armour, surviving until the final act and, miraculously, beyond. There’s even an extended gag about how audiences care little about side characters, unable to even recall their names.

Gunn is really pushing the eccentric here too, with not one, not two, but nearly three anthropomorphic or animal characters for viewers to invest in. This is the kind of stuff that makes the film what it is. The Suicide Squad is at its best when it’s over-the-top, nonsensical, and having fun.

From F9 to The Suicide Squad, What to Watch in August

The Suicide Squad opens by throwing us right into the thick of things with the new Task Force X, though there are some returning members in leader Rick Flag (Joel Kinnaman) and mayhem-queen Harley Quinn (Margot Robbie). Technically, Gunn’s film is a sequel to the 2016 disaster Suicide Squad, but it barely references past events, if at all. Think of it as a (much-needed) clean slate. The new gang is led by high-tech expert shooter and failed father Robert “Bloodsport” DuBois (Idris Elba, from Hobbs & Shaw) and fellow expert shooter devoid of any morals Christopher “Peacemaker” Smith (John Cena, from F9). Bloodsport and Peacemaker have similar skills, and their competitiveness turns the first half hour of The Suicide Squad into a bit of a penis-comparing contest.

Beyond that, we have rat-communicator Cleo “Ratcatcher 2” Cazo (Daniela Melchior, from Valor da Vida) with her pet rat Sebastian (the closest equivalent to Guardians of the Galaxy’s Groot), a man-eating great white shark Nanaue/ King Shark (voiced by Sylvester Stallone), and experiment-subject Abner “Polka-Dot Man” Krill (David Dastmalchian, from Ant-Man) who shoots polka dots (to no one’s surprise). Polka-Dot Man seems like the perfect candidate for The Suicide Squad’s elaborate jokes — and he is, contributing to what I felt was the film’s funniest gag (deployed thrice, always great), but Gunn layers it with unexpected emotional resonance too. Viola Davis returns as Task Force X office-boss Amanda Waller, but her role is to only serve as an expository machine.

Speaking of exposition, The Suicide Squad finds Harley and Co. dropped onto the (fictional) Latin American island of Corto Maltese (likely a reference to the famous Italian comic book series of the same name), where a military coup has recently overthrown long-term dictators. Waller is worried about Project Starfish, a scientific experiment that’s being conducted at a Nazi-era facility called Jötunheim. She wants them to get in, destroy all traces, and get out. For Gunn, that’s essentially an excuse to play his new ensemble off each other. King Shark brings the goofiness because of his appetite for human flesh, Polka-Dot Man grapples with his tortured past, Bloodsport and Peacemaker show off to one up the other, and Ratcatcher 2 turns out to be a gold-hearted bank robber. Harley, meanwhile, is in her own movie for the first half.

Everything You Need to Know About The Suicide Squad

Even though Robbie has top billing on The Suicide Squad, she doesn’t have much to do for most of it. Her credit feels more of a legacy thing, given Harley has been around joint longest in the DC Extended Universe — this her third appearance after 2016’s Suicide Squad and 2020’s Birds of Prey, on par with Henry Cavill’s Superman and Gal Gadot’s Wonder Woman. The Suicide Squad belongs more to Elba, Melchior, Cena, and Kinnaman. The first two are more or less the heart of the film, with Bloodsport and Ratcatcher 2 sharing multiple quiet character moments that are the highlights of Gunn’s sincere side here. And through Peacemaker and Flag, The Suicide Squad attempts to comment on decades of American foreign policy that has ravaged tiny foreign nations.

Corto Maltese can stand for any number of countries that the CIA or US military has used its might to interfere in local matters, all in the name of promoting global peace but really in the interest of American affairs (or because it simply could). Peacemaker is a living embodiment of those values and morals — he’s all about achieving peace at any cost, no matter how many die. Push him a step further and he would fit right into a black comedy like Dr. Strangelove. The Suicide Squad’s messaging does get a little on the nose at times, with Peter Capaldi’s supervillain Dr. Gaius “The Thinker” Grieves employed in an expository role of sorts, like Davis’ Waller. But Gunn is never too far away from his next gag, joke or gimmick — which ensures that the film never takes itself seriously.

That said, there are parts of The Suicide Squad that feel laboured and stretched. Even though it runs a smidge over two hours, it feels longer. Maybe some of that is because there’s no urgency to the new squad’s mission. Or due to the fact that there’s no proper villain here. Corto Maltese’s military rulers are like an afterthought for the most part. They are only as good as Gunn allows them to be. And the giant alien starfish Starro, teased in trailers, is just that: a giant alien starfish.

Still, Gunn has delivered a zany, gory, crazy adventure at his most unhinged — more than he’s allowed to be at Marvel, or he’s allowed himself to be. And for Warner Bros., it’s yet another lesson to not meddle too much with its DC films — the theatrical cut of Suicide Squad was disowned by its director David Ayer for this reason — for it sure could do with more of this, in its quest for a new identity and to stand up to Marvel’s well-oiled machine.

The Suicide Squad is now playing in cinemas worldwide. In India, it’s available in English, Hindi, Tamil, and Telugu. It’s also available on HBO Max in the US at no additional charge.

Orbital, the Gadgets 360 podcast, has a double bill this week: the OnePlus 9 series, and Justice League Snyder Cut (starting at 25:32). Orbital is available on Apple Podcasts, Google Podcasts, Spotify, and wherever you get your podcasts.