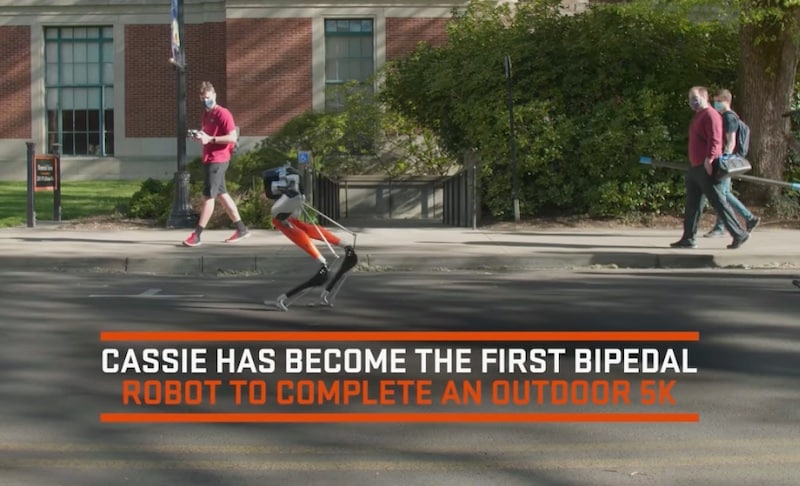 A bipedal robot, designed at the Oregon State University (OSU), has created history after it completed 5km in just about 53 minutes. Cassie, the robot, has been developed under the supervision of robotics professor Jonathan Hurst and produced by Agility Robotics, which focuses on leg mobility. The robot was first introduced, in collaboration with artificial intelligence professor Alan Fern, in 2017 and OSU students have been exploring machine learning for robots ever since.

It uses machine learning to control a running gait and completed the 5 km journey on the OSU campus on a single battery charge. Professor Hurst said that the students combined biomechanics expertise and existing robot control approaches with new machine learning tools to give shape to Cassie. “This type of holistic approach will enable animal-like levels of performance. It’s incredibly exciting,” Professor Hurst said in a statement.

The robot has knees that bend like an ostrich’s and it taught itself to run with what is referred to as a “deep reinforcement learning” algorithm. The team said that dynamic balancing is a crucial part of running and Cassie makes infinite subtle adjustments to stay upright while on the move.

Jeremy Dao, a PhD student at the Dynamic Robotics Laboratory, OSU, said that the robot is efficient, for the way it has been designed and built, adding the team was able to reach the limits of the hardware and demonstrate what it could do.

About “deep reinforcement learning”, another student Yesh Godse, an undergraduate at the lab, said that it’s a powerful method in AI that opens up skills like running, skipping and walking up and downstairs.

Professor Hurst said that the time is not far when walking robots will be a common sight, akin to automobiles and will even have a similar impact. The limiting factor, Professor Hurst added, has been the science and understanding of legged locomotion. He, however, said that research at OSU has enabled multiple breakthroughs.

During Cassie’s 5 km run, which the robot completed in 53 minutes and 3 seconds, 6-1/2 minutes were spent on resetting it after it fell twice. It fell down the first time because of an overheated computer, and then after it was asked to execute a turn at too high a speed, the team said.