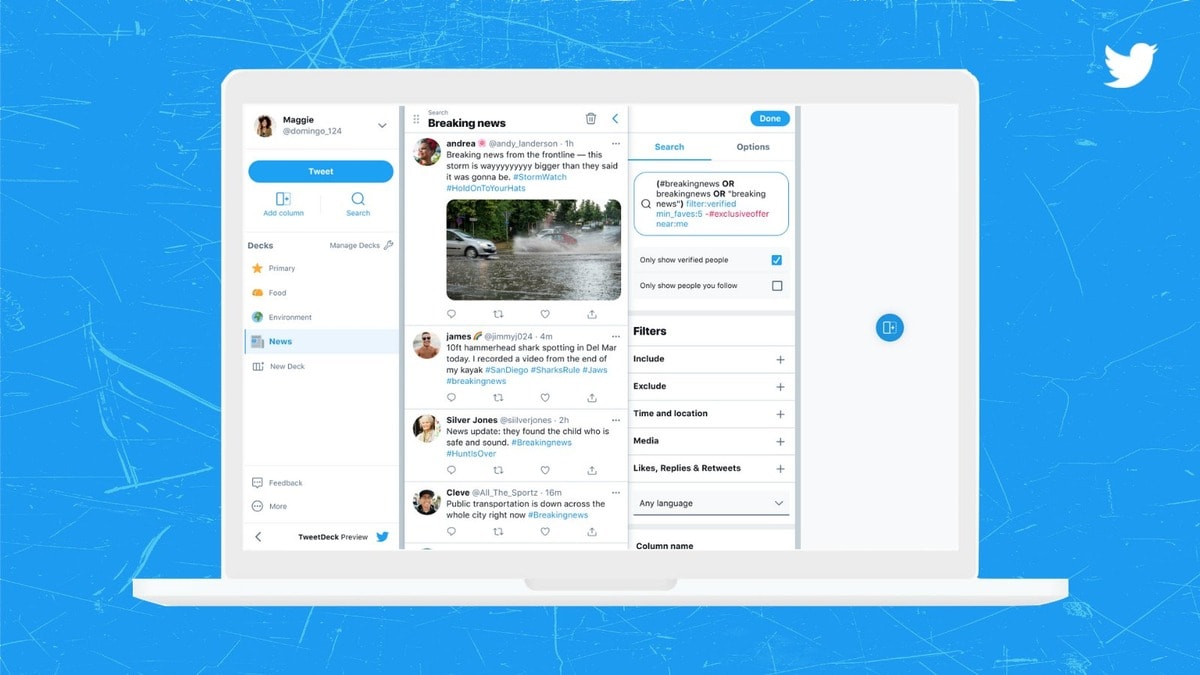 witter is working on revamping TweetDeck and has rolled out a preview for select users of the redesigned app. The social media app shared a single image of the upcoming redesign on its platform, giving users a preview of how it may look once it is released. A reverse engineering expert also shared how users may be able to view it by opting in for the beta test. Twitter also mentioned that eligible users will get a notification on TweetDeck to opt in for the new redesign.

Showcasing the upcoming redesign for TweetDeck through a thread on its platform, Twitter mentions that the redesign for its tweet management tool is available for select users — selected at random — in Australia, Canada, and the US. The tweet mentions, “Starting today, we’re rolling out a preview of the new & improved version of TweetDeck to a limited number of accounts, with enhanced functionality that incorporates more of what you see on (Twitter).”

We’re testing this preview with a small group of randomly-selected people in the United States, Canada, and Australia to start. If you’re eligible, you’ll see an invitation within TweetDeck to opt in.

TweetDeck, in a series of tweets, also mentioned that TweetDeck will be getting advanced search for helping users better find the content they’re looking for. It also said, “The improved Tweet composer lets you create threads and add (and tag!) photos, videos, GIFs, polls, or emojis to your Tweets, including scheduled Tweets.” Users will also be able access new column types like Profile, Topics, Explore, Events, Moments, and Bookmarks in addition to Decks — that helps users organise columns into groups. For more details on this, Twitter has created an FAQ page on its support website.

On July 20, product chief Kayvon Beykpour also tweeted about what new features will be inculcated in the redesigned TweetDeck. He mentioned that it would include “a full Tweet Composer, new advanced search features, new column types, and a new way to group columns into clean workspaces.” One of his tweets also mentions how TweetDeck is exploring ways to give its users more customisation and control options. Twitter is also exploring possibilities on how “TweetDeck could look like within Twitter’s subscription offerings later on.”

Reverse engineering expert Jane Manchun Wong tweeted a short tutorial on how users can try and opt in and out of the new TweetDeck preview.

// If you want to opt-out of the new TweetDeck Preview:

Back in March, Beykpour first acknowlegded a “big overhaul” of TweetDeck. Beykpour added that the redesign will let users arrange lists and feeds into easy-to-read rows. TweetDeck also lets users manage and access multiple timelines in columns and even schedule tweets. The upcoming redesign is also a major update the platform has received in the last 10 years.

Twitter hasn’t yet made any official announcement on when the new design will be rolled out to all users.