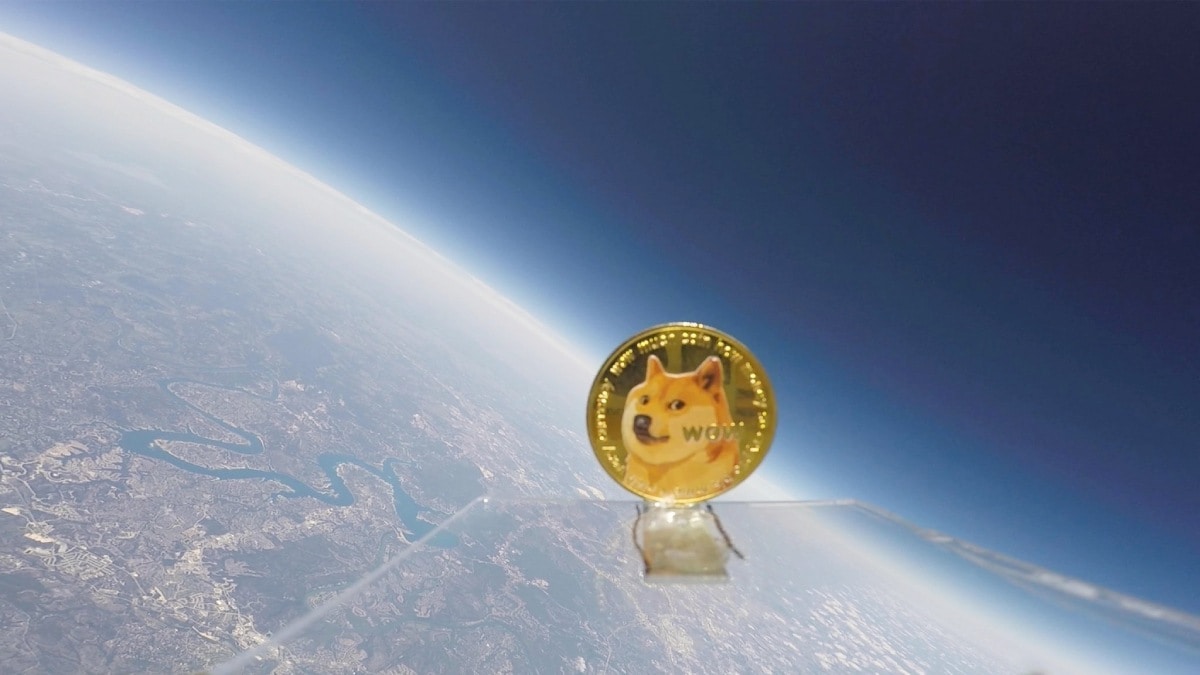 While many people are waiting for Elon Musk — who has repeatedly put his weight behind Dogecoin on social media — to send the meme currency to the Moon, a US-based YouTuber has actually tried to do something of that sort. On the tech billionaire’s 50th birthday on June 28, Reid Williamson sent an actual Dogecoin to space with a weather balloon. Williamson posted a video titled, “I sent a literal Dogecoin to space” on his YouTube channel that showed him and his friends preparing to achieve the challenging feat.

The video showed Williamson and his friends first identifying the launchpad. Once they zeroed in on an open green field, they began setting up the balloon system and tying up the cryptocurrency payload to it. After a few attempts that went south, the team finally managed to get a successful launch. A camera attached to the payload showed the bird’s-eye view of Earth as the Dogecoin escaped far away from it. Later, the weather balloon returned to Earth and landed a few miles from the site it was launched from.

I sent an actual Dogecoin to space with a weather balloon for @elonmusk 50th bday #DogeFather #DogecoinToTheMoon $DOGE pic.twitter.com/WSLTdaBwVT

A user, @lilyledyard_, commented on Williamson’s tweet to congratulate Musk but also pointed out that the billionaire is yet to follow through on his promise.

@elonmusk happy 50th, but @williamson_reid sent doge to the moon before you did and he’s only 23

Noticing that comment, another user, @Doge4faithfull, asked everyone to be “respectful with Musk” for his birthday. “A trip to the Moon takes eight days, close to 200 hours. Not one hour. That’s Earth. I’m very glad they did it anyway, and as a gift to Musk. Not to shame him,” the post read.

Let’s be nice and respectful with Elon for his birthday .
A trip to the moon takes 8 days close to 200HOURS
Not 1 hour. That’s earth . I’m very glad they did it anyway , and as a gift to Elon. Not to shame him.
Elon’s not sending a coin only , he’s sending an actual satellite ????

The person added Musk will be sending a satellite that would “process transactions for us all,” something that no other digital coin has done.

A satellite that would process transactions for us all , something that not any other coin has including Bitcoin (they’re just sending just a basic metal coin this year).
He spent a fortune for our #doge1 satellite ????
And another fortune for a supercomputer dojo4doge coming soon

When user @williamson_reid asked whether that was real, Williamson said “yes.”

Yes, we literally sent a doge into space ???? pic.twitter.com/MHOcFDVsqH

Some other people congratulated the YouTuber and his team.

HE SENT A DOGECOIN TO SPACE. what did y’all do today@BillyM2k@DogecoinRise@justinscerini@dirtydoge@itsdogecoin@DogecoinZack @ShibArmy pic.twitter.com/ajZX3jPVWB

Dam that’s dedication. To the space!!

In May, Musk had promised that his firm SpaceX will put “a literal Dogecoin on the literal Moon.” In a tweet, he said the commercial space exploration company will launch the “DOGE-1 Mission to the Moon” early next year.

SpaceX launching satellite Doge-1 to the moon next year

The tech tycoon has often supported Dogecoin on the social media. As of 11:12am IST on July 1, Dogecoin price in India stood at Rs. 18.28.